It seemed strange to me too. I mean. Hmm.

Three years is a fairly long time. In all fairness, I never sat and actively thought: this, I will hide!

If it is that I have consciously hidden this part of my life, it must be because of the “poor little fatherless darlings” narrative. I have heard it too often. It wears me out.

On reflection, it must have been in those moments that I wrote a note to self. To remind me to hide this.

I am not sure why…

I may have done so to break away from the stats: the behaviour problems, higher aggression, more likely to go to jail stats. The girls without dads are more likely to become preteen mom stereotypes.

Thinking about it, I quietly laughed to myself in amusement. Wondering if a more academic word had been coined yet for daddy issues.

I was 6 and my brother Zweli was only 2 when it happened. I remember the day. Vividly. That morning makazi (mother’s younger sister) called our names from eldest to youngest: “Pelisa, Zandi, Zinqi, Zweli, wake up” she whispered.

sis’Zameka our house helper had already tucked our luggage in.

Outside it was dark but for the white stallion we were driving in.

In the early morning, in that stallion, we took off. The drive from Umtata to Rhini was dark at first. As the hours went, the light from the sun slowly greeted. Silvering the windscreen. Almost to wish us well for the journey ahead.

As soon as we took off Zweli wiggled himself out of sis’Zameka’s grip and spread himself on the sponge between the two square seats jutting out on either side of the stallion. Above his head were neatly packed bags, with lunchboxes on the sides, umphako “food for the road.”

The ride was long and dusty.

Zandi, my sister, looked sideways throughout. Watching out of the window, saying nothing. She merely stared at the outstretched fields. Hypnotised by the tallish faded grass that glimmered through the glass window plate.

The rest of us earnestly engaged as Pelisa retold the danger stories that we heard off about those who erred and walked eKhwezi after dusk. After that, we chuckled and chuckled about Toby from Northcrest. The swaggy coloured gangster with the gold tooth. Toby who only wore matching red Addidas tracksuits & tops.

When there were no more stories, we sat noiselessly, listening to the rattling of the Stallion. The same way the head and body of an ant breaks, the front, and back of the Stallion moved jaggedly. So as we drove, the back and front knocked on the auburn gravel ground. The back always knocking a second too late, creating a disjointed, offbeat tune. Front-back-back-front-front-back.

Right till we arrived ezantsi. A name we used to refer to Tamkhulu’s home, my grandfather’s house.

The stallion doors swung open, I stuck my bums out first, wiggling my feet so my toe tips could reach the ground. When I felt tallish enough I jollily jumped off.

It was strange. The yard was swamped. Cars and cars and hordes of women who were hard at work. Washing plates. Raking the yard with thatched brooms.

Chickens pivoting their heads, flapping their feathers from the ground. The smell of umsi smoke rising from the black bellies of the three-legged pots. Saturating the atmosphere.

Men and women loped across the yard, wearing pity on their faces and exaggerated affection. “Nantsi imali, khawuyo thenga isweets,” one after the other said, prodding in their pockets and chests to find coins to give to us.

Later on, we returned ezantsi with sticky Cadbury’s marrowed on our hands and mouths full of crushed sweets.

“Feel my heart,” Zandi said as we re-entered the yard.

Her heart was mechanically thumping.

She seemed distressed. In a state of panic.

“Like something is-not- right… You know?” A light flush of perspiration foisted over her forehead. “I don’t know,” she said, “don’t mind me, akhonto wethu. But, mhhh,” she sighed again, “something doesn’t feel right.”

Ngoba, I asked? Why would you say that?

“Last night,” she said hesitantly. “Izolo, ayy heard-makazi-cho-king whilst praying. She was pleading with Jesus to help us, she kept saying, please God don’t let it be true, in the name of Jesus. Please, God. She sounded broken, Zinqi.”

“As though someone had violently split her heart into two.”

Little by little I sensed a cold fear enter as she finished speaking.

Needles, digging into my chest.

I tried to muster words to dismiss her ripe concern. But before I could respond, she’d walked away. She trooped into the open yard, frantically searching with her eyes. Asking around, “Uphi utata?”

She was brushing through the greetings this time.

This is all she wanted to know.

In response to Zandi’s non-stop question, sis’Pinky slanted her head low and wiped her eyes with the palm of her hands. She cleared her throat and instead said: “Ina nantsi imali, khawuyo thenga ilekese.”

Zandi’s arranged smile pirouetted downwards. She had enough of the cents and sweets. What she wanted was to see her mother- and-father-together.

But she knew. She knew it could never be that way again.

Terror darted all over her cheekbones.

In that deadly moment, I wished I was Pelisa.

She would have known what to do. What to say.

I simply remembered a song from my school. Don’t be a doubting Thomas.

I wished to sing the words to her.

Don’t be a doubting Thomas,

Just lean upon his promise,

When you can pray?

Instead, I sang the song in my mind, walking to its beat, catching up to Zandi’s fast foot.

We stood by the door, where we found umama. She sat still in the hollow room that wasn’t usually used.

She was rooted to the floor. Her left hipbone planted on a thatched mat, ikhukhu. Her legs curled in, huddled around herself.

She was draped in a black silk robe and doek and she had a checkered quilt over her waist. The bodies of elders assembled around her, piecing smiles through dried bones and wrinkled cheeks. Neighbours and long lost aunts walked in and out with sullen eyes, serving tea and bread, isonka sombakho.

Mama looked like a shadow of herself. As though she had been wrestling all night. Fighting to lift her soul up in time to look alive in the morning.

If you glanced at her a second time, you could tell she lost.

Her eyes were swallowed in. Full of sorrow. Her shoulders hunkered facing the ground. Her gaze lost as though her senses had eroded.

She looked like she was counting rocks that were hanging high in the air. I went to sit next to her. She moved closer. Turned her head diagonally towards me and warmly rubbed my back twice, shaping two love circles. I inched even closer now, trying to trace her gaze.

How many rocks is she counting? I wondered. Do they hang straight, one next to the other? Or do they cave in at the ends and by the edges forming stony shapes?

Something I had not thought about entered my mind. Could mama’s deep stares make magic’s? Could she crayon in bright colourful patterns on rocks by staring deeply into them?

All I knew is that she needed the rocks. Counting them kept her alive.

Kept her tears from falling. Counting the rocks balanced the fire of pain that sat on her throat. The fire that now burned up the phlegm that would have otherwise heaved from her chest if she let herself cry.

Maybe that’s when she wrote her note to herself.

From that day onwards, she decided that she would rather chew her tongue with her mouth full than to speak of cherished memories with her now deceased husband. She would never speak of him again or the kind of pain that spread through her chest like cracked glass. Shattering.

Once when I was eighteen, my eldest sister Pelisa was twenty four, my other sister Zandi was twenty two and my brother who was now fourteen, we sat mama down in the lounge area. Circled around her.

We souught answers. We yearned to intimately know the man. The man we would have otherwise called father.

“How did he really die mama,” I asked?

“Ndiyafana naye?” His voice pitched. “Am I anything like him ma” now his voice broke as he asked.

Such a delicate and vulnerable question. I knew Zweli and in that moment, I could see it, the expectant hope that lodged in his eyes. He had hoped that umama would start listing the many ways he reminded her of utata, dad.

Like when he laughs, the way in which his dimples gurgle from his cheeks. Or how his face matures after a hair trim, making him look more like dad. Or the way his hands perspired, damp, when he was excited about a new idea. Or how he would foil his forehead when he was curiously asking a question.

We all knew of the ways Zweli resembled utata dad, but we wanted to hear mama speak. Over the years we’d patched the list, by collecting fragments of stories here and there from those who proudly spoke of dads love for his only son, Zweli. Through these stories, we created a quilt reality of our father, our brother.

But mama did not mention any of these. She sat static. Her jaw soft as though, she was transfixed in his memory. Zweli asked a more over-all question, to ease his disappointment.

“What kind of man…what kind of father was he ma? Waye’ngu umntu onjani?”

Ma’s tongue tethered. Feathering then falling flat. In that moment, she lost the courage she had mustered over the years.

I mean, like us, she had never planned his going ahead of time. His passing was never part of the plan. But in that moment, she was supposed to know more.

“Ngoba,” she said at last, “why do you ask?” A bubble of soreness burst in her throat.

That was the only word she could muster.

“Why do you ask” she answered us with a question. She gulped. Swallowing her voice.

Her very children were pulling clogged nets from her spirit. Awakening demons she had laid to rest.

The day he passed, she had vowed to herself to remember him in secrecy.

She quietly shelved their precious memories, chewed her tongue and said to herself, “hide this.” 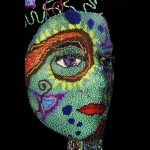 2 thoughts on “The mother who chewed her tongue Pt1”